After two weeks of fighting with technology going wrong in the bush, we finally have 2 VillageCell GSM base stations up in Macha, Zambia. Phone calls are now being made within a 5km radius between multiple base stations, using an existing Wi-Fi-based backhaul.

There were many lessons learnt:

Here are some highlights from the past 2 weeks VillageCell installations. 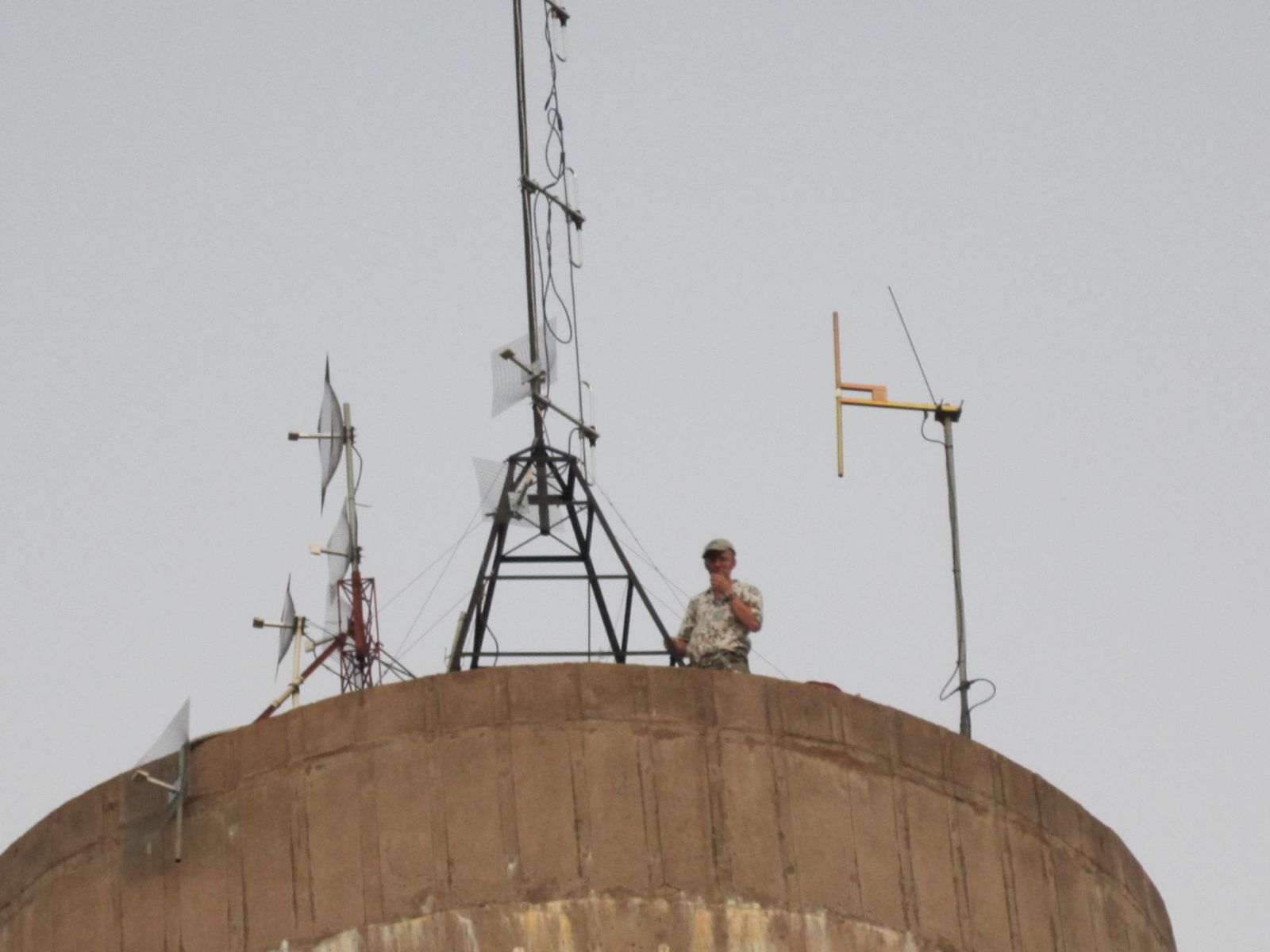 We used David's old climbing rope to haul the 60 pounds of equipment up the water tower.  This included a surprisingly heavy omni antenna, car battery, charger, a base station and a 15m long 12V power cable. 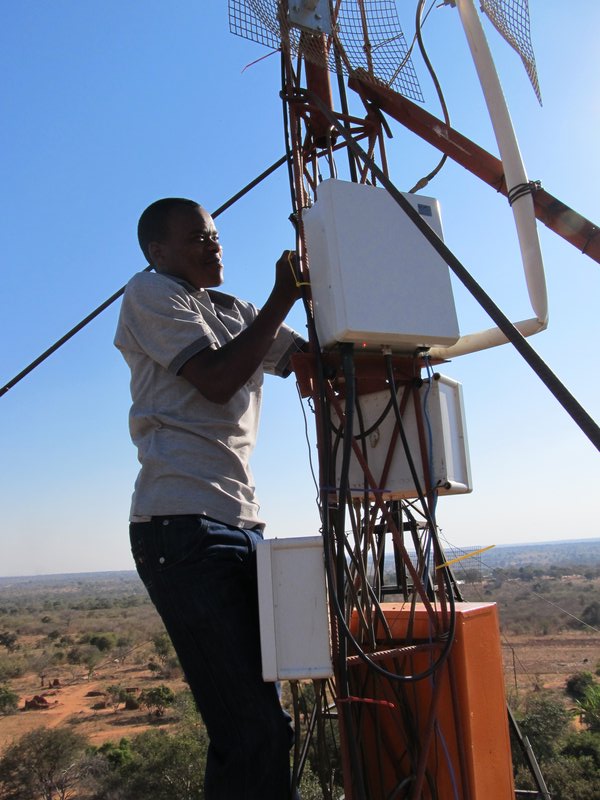 Austin, a local networking guru in Macha, making sure the base station (RangeNetworks snap unit) is securely fastened to the lattice mast on the water tower. The sunsets from up here are really spectacular.

10m high base station near IT room

We discovered the 1800MHz signal doesn't propagate very well into some topology dips around Macha. We had to install another base station near where the IT support team work to fill in a propagation shadow. The IT support team regularly make local calls between themselves, so it was critical to cover this area. 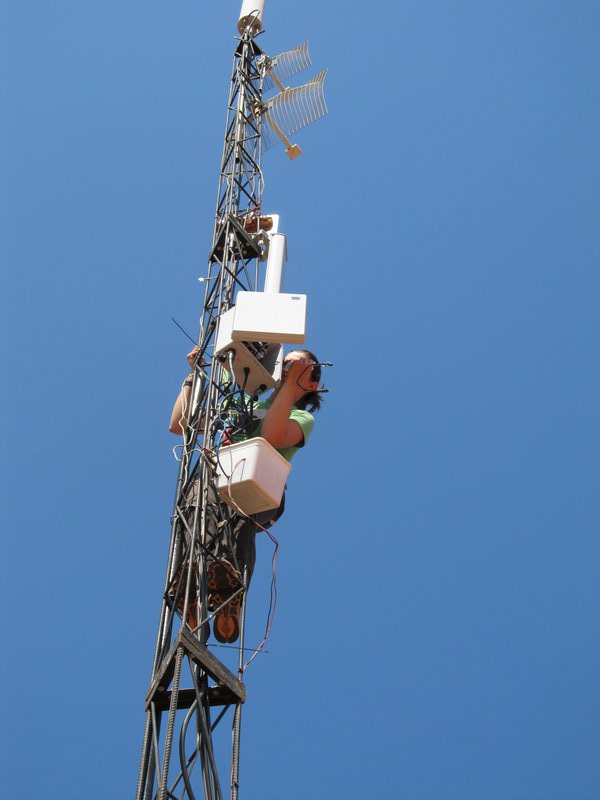 Mariya adding an external hard drive to the GSM base station near the IT room so that we can monitor all call traffic.  Notice the use of local material to make enclosures -- an ice-cream container being used shield wireless routers from the elements.

Our power solution was an analog battery charger and deep-cycle battery in parallel to supply the RangeNetworks snap unit with 12V. It turns out that simple analog battery chargers are not designed to behave as power supplies for long periods of time. Two of the chargers burnt out after a week of use. The other problem is that simple analog chargers overcharge the batteries if they are left charging a battery for too long and the batteries began to leak acid.

Clearly a much more sophisticated circuit is required, something which trickle charges the battery and acts as a reliable 12V power supply at the same time and then switches to battery supply mode when the mains power fails. This will require a current limiting resistor with a cut off circuit for when the battery is fully charged on the battery charge loop and a diode on the backup battery power supply loop which allows the full current of the battery to supply the base station, bypassing the current limiting resistor.

In the meantime David jerry-rigged an interim power solution using some UPSs and 5A 12V monitor power supplies that were lying around the store room. 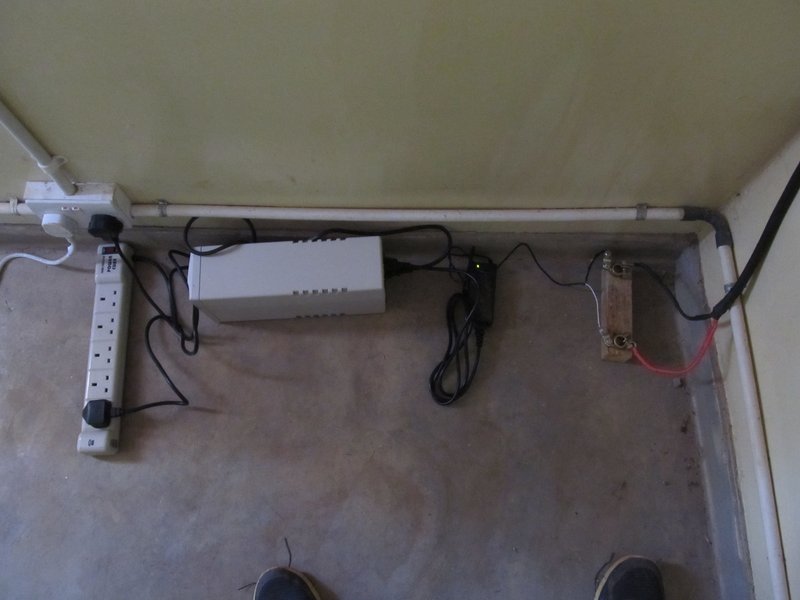 The jerry-rigged power solution. Notice the wooden block using nails to hold the original battery terminals in place so they don't short out.

The lesson learned here is come with tools and the ability to adapt to any situation. Although our research for this project lies in local call traffic patterns and quality, we will have frustrated users and no research material if the base stations power supplies keep failing due to an inappropriate power solution.

All in all, a great piece of team work and it was also good to work with the local Linknet team - they are a fantastic group of talented local heroes!